They’re overworked and under paid in an NHS that is underfunded and under growing pressure. They’re relentlessly scrutinised and slagged off, blamed and drained, suffering, stressed, and still they soldier on doing the best they can to deliver the best service they can in uncertain and unstable times.

I have been on the receiving end of NHS care more times than I could care to mention. It has saved my life and helped me through some of the most difficult periods of time, both physically and emotionally. I used to think that me and my mental health problems (namely depression, anorexia and bulimia) were a drain on the NHS, as so many others have and do, but looking back I’m just thankful that it was there and that I didn’t have to rely on an insurance policy that probably wouldn’t have stretched as far as I would have needed it to.

I may have had to deal with medical professionals who didn’t “get” my illness. I may have had to sit in a waiting list to get the therapy I needed. I may have relied on medication alone when maybe a talking therapy alongside it would have had a better outcome. I may have had to ring around specialised services, begging for funding for an inpatient bed. I may have had to give up, let my illness take over and worsen to qualify for treatment that would possibly have worked quicker and saved more money in the long run had I got it earlier. And I may have shouted and screamed at doctors, nurses and nutritionists when I needed them and there weren’t enough to go round. I’m sorry and I sometimes wonder how things would have turned out had things been different, had there been more emphasis on prevention, early interventions, joined up care or more mental health funding… but most of all, I’m simply thankful.

For me, this isn’t about grand gestures, life-saving surgeries or miracle treatments – it’s about the little things that happen every day in GP surgeries, A&E departments and wards all over the UK, every day.

So, as our NHS turns 70, here’s a personal thank you to those who helped me:

To the school nurse who took time out to see me every week because my BMI wasn’t deemed low enough for any kind of specialised treatment, thank you.

To the nursing assistant who told me that “toilets are for pissing and shitting, nothing else”, thank you.

To my GP who, when I was making myself sick 15+ times a day but wasn’t at a low enough BMI for inpatient care, fought for me to get a bed I desperately needed, thank you.

To the receptionist who stops me in town ten years after discharge to ask what I’m up to and how things are going, thank you.

To the dietician who sat down with me for over an hour discussing the surface area of a bagel, thank you.

To the group of night staff who let me hang out in the staff room and watch YouTube videos of Michael Jackson on the night he died, thank you.

To the nursing assistant who’d bring his guitar in to the unit, teach people to learn, sing with people and set up a music group off his own back, thank you.

To the night nurse who rescued me from a tree when I’d snuck out to drink, then had diazepam, then resisted sleep, I’m sorry, and thank you.

To the head of the ward, who the above was reported to and threatened me with early discharge, but listened to me and decided against it, thank you.

To my consultant psychiatrist, who put up with my fight against weight gain for so many weeks and months and always with a distant warmth – I felt it, thank you.

To the night nurse who suffered with agoraphobia and shared her own experiences and thoughts and fears with us and made us feel more human, thank you.

To the nursing assistants who enforced the ‘no Jeremy Kyle’ rule during post-breakfast observations, thank you.

To the therapist who put up with me insisting there was no way I would spell my own name incorrectly to prove I didn’t HAVE to be a perfectionist – I still think I had a point and would never have done your exercise, but thank you (for your patience).

To the nurse practitioner who, when I was leaving the eating disorder unit after a 9 month stay said “I never want to see you again”, thank you.

To the therapist who would speak to me on my level and swear and not take any of my bullshit and not speak a word of bullshit to me, thank you.

To the psychiatrist who I bumped into, years after discharge, DJing in one of my local bars and chatting to me like a friend he met in a bar, not a hospital, thank you.

They all helped me in so many different ways and I’m sure we could all make our own lists. Maybe we should.

We should be more thankful of what we have. We’re so lucky to have the NHS and yes, it doesn’t always work the way we would like it to, but it does its best. It’s not flawless, but it employs some of the best people we have and that needs to be celebrated, especially now. 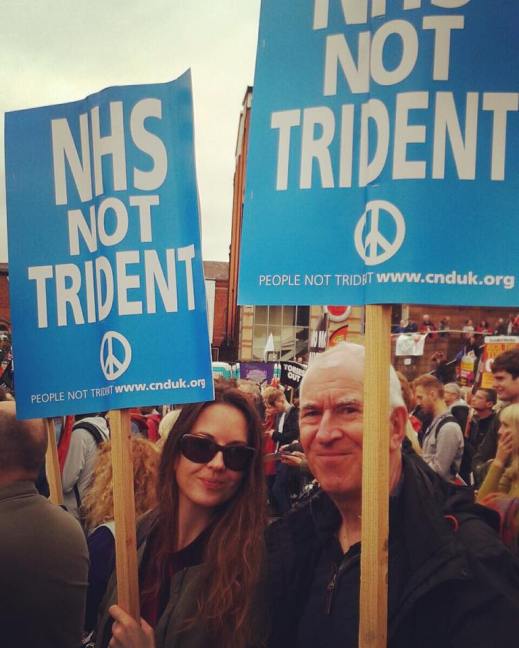 Me (left) and my pa (right) at some march, loving the NHS

One thought on “Seventy cheers for NHS staff”

My Tweets
My Tweets